Too Many Rock Stars (Access All Areas #1) by Candy J. Starr 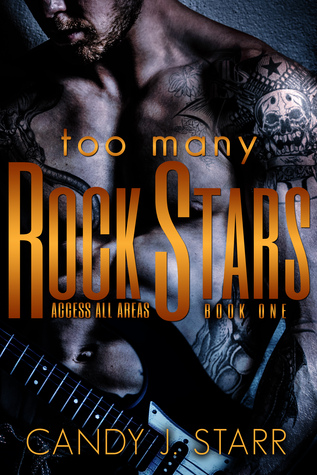 I don’t date rockers. Don’t sleep with them. Don’t even swap spit. I’ve been working as a band booker at Trouble -- the coolest indie rock club in town -- long enough to know what a bunch of screwed up, egotistical jerks they are. Some of them might seem okay at first but that’s just because they've learnt to hide it better than others.

That would be fine if Razer didn't keep popping into my office, making himself so annoyingly attractive. And he only gets more insistent when the leather-clad Alex hits town.

While they compete for both rock glory and my affection, I get stuck in the middle but all I really want to do is save my job and the club.

That’s the trouble with my life: too many rock stars.

I folded my arms around his neck, one hand grasping my wrist and my other holding the umbrella. His breath on my neck tickled in a way that reverberated through my body.

"I think the rain's stopped now," I said. "I can put down the umbrella."

"Best you don't. You can never tell with summer rain. It's a sneaky bugger."

But his eyes twinkled and I think he made that up just so I'd cling tighter to him. Our bodies rubbed together, so hot that in the rain, steam rose from our skin.

He carried me down the crowded street, people parting to make way like water in front of a speed boat. I giggled and leaned against him, feeling slightly drunk even though I'd not touched a drop.

Finally, we got to my house.

"Are your arms tired from carrying me?" I asked.

His t-shirt was wet and covered in dirt from where I’d pressed against him. I had to have been even worse. Still, that wasn’t important.

I felt like all the weight of responsibility had washed away in the rain. The part of me that put the brakes on had gone. She'd be back but, while the rain lasted, I could be someone else.

He carried me through the doorway as though I were a bride on her wedding night, and sat me down on the bed. Well, the mattress on the floor covered with an old Indian bedspread and chocolate-stained sheets. I noticed the smell, like I'd forgotten to put the garbage out. I always forgot to put the garbage out. Not a rotten smell but just a little over-ripe. And the cobwebs on the ceiling and the holes in the carpet. But Razer didn't seem to notice.

He went to the fridge.

There was half a bag of frozen peas at the back of the freezer. I had no idea where they'd come from. I had no recollection of ever buying a bag of peas. He had to hack at them with a knife to get them out. Then he wrapped the bag in a tea towel and unzipped my boots. As he slipped them off my feet, I wondered that he could be so strong and so gentle at the same time.

The shock of the ice on my ankle made me jump.

"You'll have a nasty bruise," he said.

He sat down beside me and placed my ankle on his knee. He felt it to make sure it wasn’t broken. I wasn’t sure I trusted his medical knowledge but it just seemed sprained to me.

“Do you know what you’re doing?” I asked.

He nodded. “Yep, years of playing sports in high school. This will be painful for a couple of days but you’ll be fine after that.”

I had to lean back on my elbows to support myself. The rain pattered on the roof and rivulets ran down the window panes. The ice on my ankle turned my foot numb. I squirmed.

"Don't move. You don't want to do any more damage. You'll need to keep it elevated too."

I nodded. As the throbbing in my foot lessened, I became more aware of him. The two of us in my barely function apartment. The way his damp t-shirt clung to his

body and how the rain had made his hair curl slightly.

"What happened?" he asked. "If you don't want to tell me, that's okay but you were pretty upset."

I tried to sit up as best I could and told him what Chuck had said. Of course, I didn't tell him everything. There are things you just don't tell people.

Razer nodded as I talked. He understood.

"The only thing to do is to make sure he can't sell the place. We have to work together."

I gave him an appraising look.

"Hey, I want to save the place as much as you do. It's my people. We could play at any club in this city but that's where we started and we'll keep playing there forever."

"Even if you become a huge star," I asked.

"Even if I become the hugest star in the galaxy. There are some places that just feel real. Like family. Where you don't have to be anyone but yourself and other people don't give a shit. They want you to be yourself. It's comfortable and even the bad times are better there than anywhere else. That sounds stupid, I know. I can't say what I mean..."

I smiled, a shiver going through me at his words.

"I know exactly what you mean," I replied.

His gaze locked onto mine. A wave of desire shot straight to my soul like I'd known this would happen from the moment he picked me up. It was part of the crushing weight that something I loved might end, my need for comfort, the battering of the rain. Part of Trouble, that might soon be taken away from me.

He looked at me until I blushed and wanted to turn away. Something in his eyes made me feel like he could see things in my soul that I didn't know myself. I couldn't turn away though; I was too caught in the moment.

He gently lowered my foot to the bed, propping it on a pillow, then reached over and stroked my cheek. My skin felt like it was on fire and I couldn't breathe. My senses went haywire. I knew I should've told him to stop. My brain told me that was the right thing. I had to fight but the rain kept pattering on the roof and the droplets ran down the window and my heart wouldn't let me move.

The rain enveloped us in a cocoon and the outside world seemed so far away. It wouldn't hurt, just this once, in this moment, to give in.

When his lips touched mine, I almost jumped from the sensation. The wave crashed through my body, I felt like I’d drown. But he wrapped his arm around me and pulled me closer. The raindrops on the roof beat out a pattern that mirrored the beating of my heart and my stomach dropped like I was at the top of a roller-coaster, waiting to plummet out of control.

Our mouths became hungry with urgent kisses while my insides churned. This went against everything I believed in, my personal code of honour thrown to the ground and trampled but it felt good and right. I moaned with my need for more. He was trying to tell me something with his kisses, a whole story for me to read. I wanted that story to unveil itself to me. I pulled him closer and ignored the twinge of pain in my ankle, just to have his body against mine.

He lowered me onto the mattress, gently, without taking his mouth from mine. I traced the tattoo lines along his chest and down his arms, the dips and curves over muscles of steel.

His fingers deftly undid the buttons on my dress until it fell open. His finger ran down my stomach, slowly, as though memorising every contour of my skin. It tickled and I tried not to flinch but that just made him laugh.

There was something right about it, like we were meant to be. No need to rush

or to think too much. Just a delicious dream.

Then the phone rang.


Candy J. Starr used to be a band manager until she realised that the band she managed was so lacking in charisma that they actually sucked the charisma out of any room they played. “Screw you,” she said, leaving them to wallow in obscurity – totally forgetting that they owed her big bucks for video equipment hire.Candy has filmed and interviewed some big names in the rock business, and a lot of small ones. She’s seen the dirty little secrets that go on in the back rooms of band venues. She’s seen the ugly side of rock and the very pretty one.But, of course, everything she writes is fiction.
Αναρτήθηκε από Sofia Loves Books στις 8:35 AM